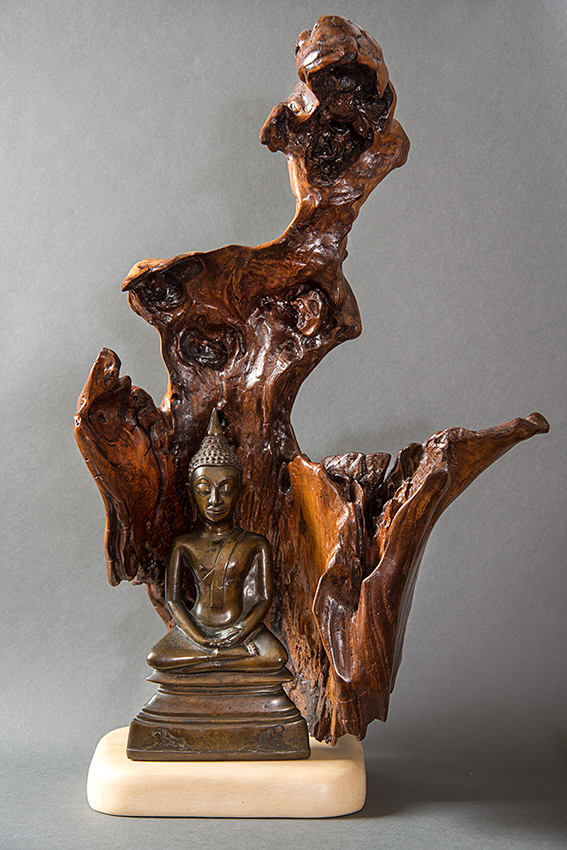 After an apprenticeship in fine cabinet making, Sabine K. now puts her knowledge of and skill in woodwork to serve her aspiration of creating art pieces in wood. First interested in the transformation of manufactured objects, she came back during these last years to nature, which she says raised her like a mother. Her work brings back to life natural objects, fractured rocks, dead branches, stumps,…One could say that she takes care of them, freeing them from everything that goes, that is dead, and by highlighting with extensive polishing and very discreet varnish, their shapes, the nuances of their colours, and all the organic power of Nature which gave them as a gift. Some of these compositions include sacred objects – Tibetan Buddhas, Indian deities, Khmer Boddhisatvas,.. – often ancient, sometimes very rare.

Sabine says that she thanks the Universe and the Earth in every moment of her work. And it can be felt. Monumental or very small, these objects thus revealed to themselves and therefore to us are simply beautiful; a praise to slowness and to the transient, shining caskets part mineral, part plant, they communicate all the sacred which exists in the organic power of nature and put it in relationship with the human longing for Beauty.